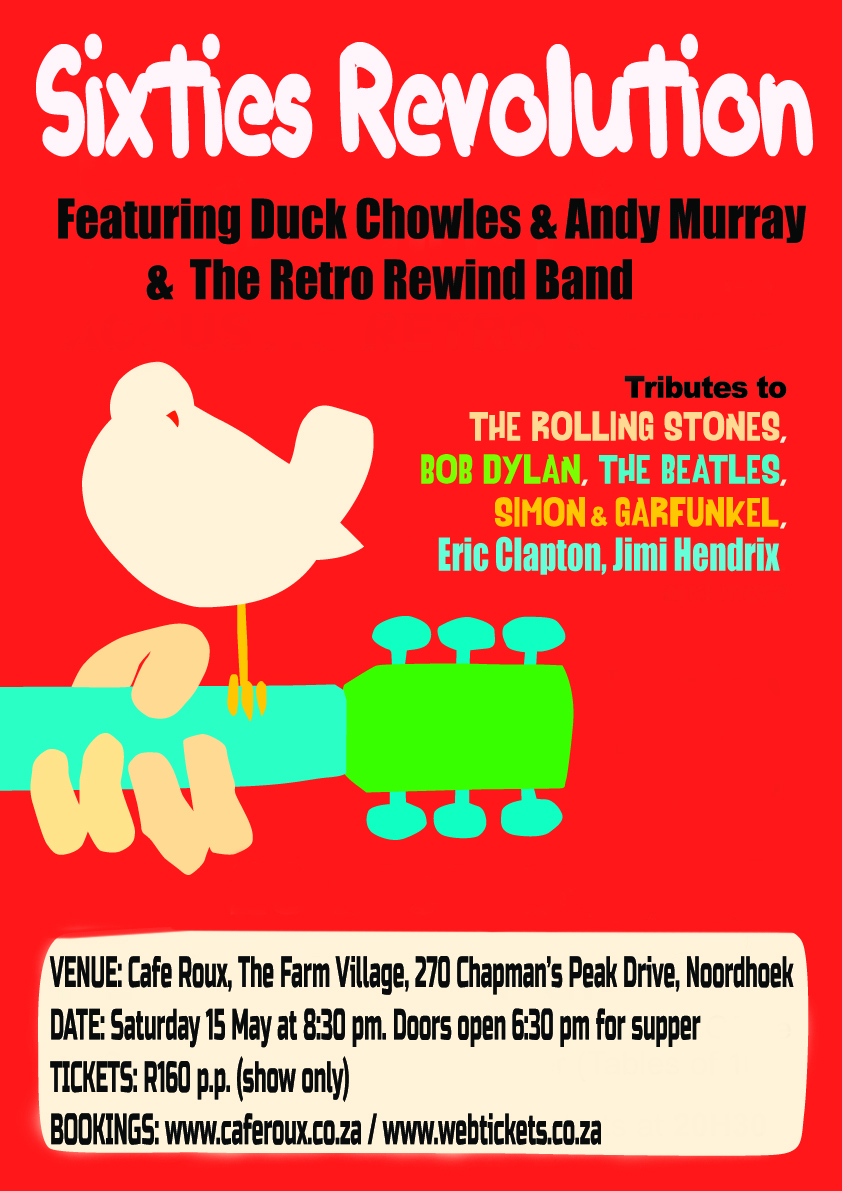 “The Sixties Revolution” is a special tribute to The Rolling Stones, The Beatles, Bob Dylan, Jimi Hendrix, Eric Clapton, Bob Dylan, The Doors and Simon & Garfunkel. Duck Chowles, Andy Murray & The Retro Rewind Band brought you the highly-acclaimed, “Simon & Garfunkel meets The Beatles” show. Now they are back at Café Roux, The Farm Village, 270 Chapman’s Peak Drive, Noordhoek, on Saturday 15 May at 8:00 pm. to pay tribute to a decade, the ’60s, that marked a time when pop music became more than a teenage fad, but an important art form in its own right, as it sound tracked the hippie heyday & the Vietnam War. Doors open at 6:30 for dinner.
With his superb energy & vocal range and his uncanny ability to perfectly mimic artists down to the finest idiosyncrasy, mercurial Duck Chowles, South Africa’s Rock ‘n Roll chameleon, who has won acclaim for his spellbinding and sterling impersonations of Mick Jagger & The Rolling Stones, will captivate the audience, as he pays authentic tribute to these musical greats with hits such as “Honky Tonk Women”, “Jumping Jack Flash”, “Paint it Black” & “Ruby Tuesday”. Duck will also pay a heart-warming tribute to one of the greatest singer-songwriter poets, Bob Dylan, with songs like “Blowing in the Wind”, “Just like a Woman” & “Mr Tambourine Man”. Inimitably dexterous on lead guitar & vocals, the man with the unassuming stage personality, Andy Murray, who performed with Gate and toured with Chubby Checker and Freddy & The Dreamers as a support act in the ’80s, and who has been hailed as a “mean guitar player” and recognized as one of the best instrumentalists & best lead guitarists locally, will pay tribute with some blistering guitar solos to two of the most influential guitarists of the ’60s: Jimi Hendrix with “Purple Haze” & Eric Clapton with “Sunshine of Your Love”.
Duck Chowles & Andy Murray also achieve the perfect harmony blend, one of their trademarks, for Simon & Garfunkel hits like “The Boxer” & the iconic, “The Sound of Silence”, as well as for The Beatles’ “Norwegian Wood” & “Nowhere Man”. The show also takes you down the highway with “Born to be Wild” by Steppenwolf and Jim Morrison & The Doors’ “Riders on the Storm” & “Roadhouse Blues”.
The Retro Rewind Band features musical genius & celebrated performer, Duck Chowles, of Barnyard fame, on acoustic guitar & vocals, Andy Murray, also of Barnyard fame on electric & acoustic guitars & vocals, as well as accomplished, like-minded musicians, Alan Llyod on drums & bassist Karl Hering, who both also performed in various Barnyard productions. Eastern Cape-born-rock and roll artist, Duck Chowles, who is a producer extraordinaire, is a household name and together with Andy Murray, has been on the forefront of the South African entertainment industry for more than 3 decades. They started working together in 1993 in a Tribute to The Rolling Stones called Sticky Fingers at the National Arts Festival in Grahamstown and continued performing together in countless hit shows such as Sixty Something, Roll over Beethoven, Glory Days, Station 70 and many more. This cast of highly professional musicians have paid their dues and have earned the respect of aficionado (fans) of ’60s music!
“The Sixties Revolution” is a show strictly for all ages & music tastes, a show celebrating all styles of music, song & timeless classics that will have the audience carried along on a flood of good vibrations. A crowd-pleasing show that will treat ’60s music nostalgists to an exciting musical journey into the past!
**Arrive from 6:30pm for supper
**Music from 8pm
**No dancing please. Covid protocol at all times.
**Limited tickets available