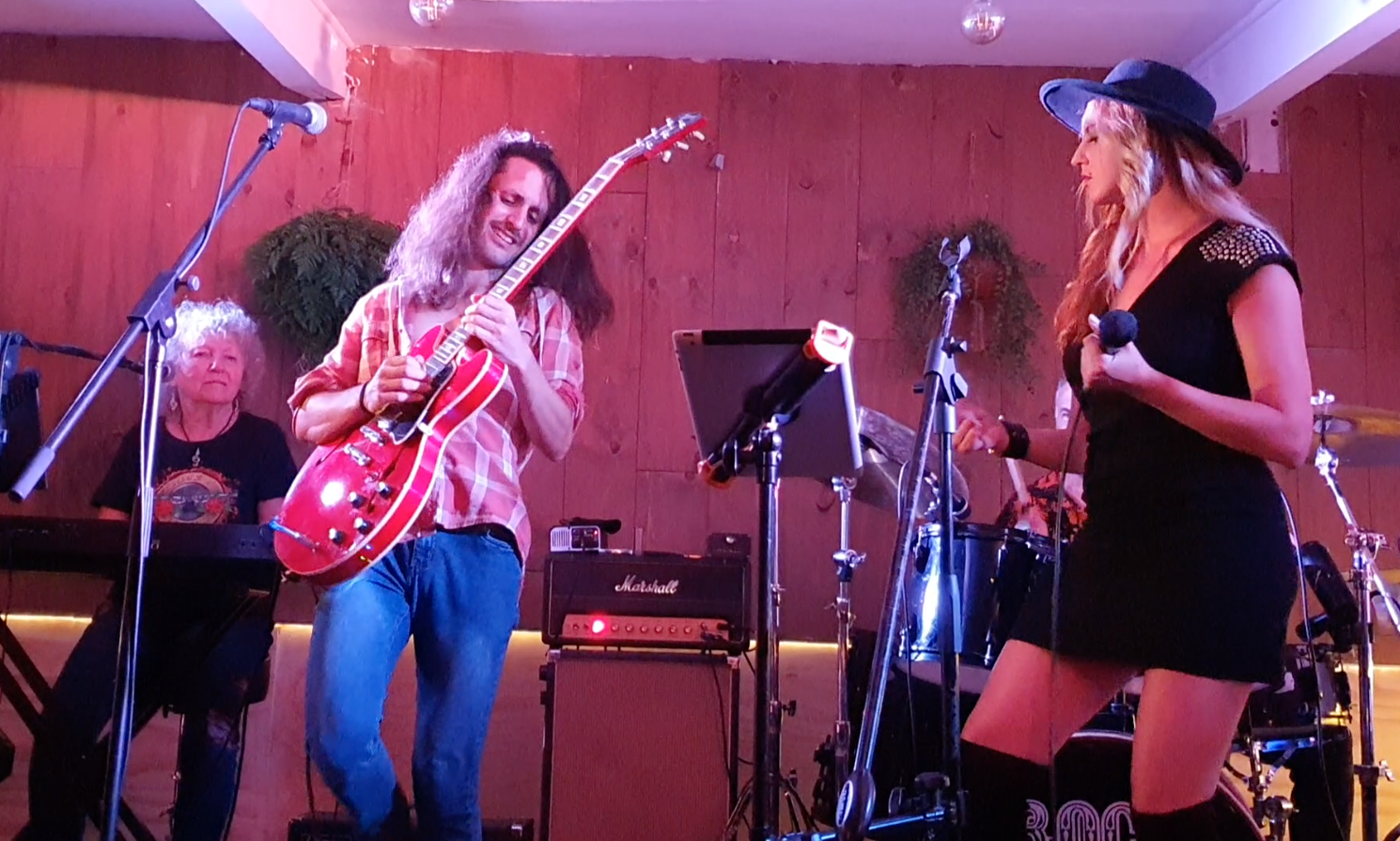 Rock Steady is a 5-piece rock band who perform regularly around Cape Town.

They have been performing at Ferryman’s V&A for some 7 years, and perform regularly at Café Roux, The Bay Sports Bar and other pubs and clubs , as well as for private parties, corporate events, weddings and festivals.
Highlights include performances at the Beer Festival, Sushi Festival, Porsche Club Cape, Harley Davidson Clubs and the RCYC.

Rock main singers in the band, Rock Steady is easily able to perform a large variety of music and besides having musicianship under their belts are also passionate about creating high energy performances.

Steady prides themselves on the diversity of their song choices and although rock is their genre, they are equally at home with blues, funk, pop, reggae, country, and R&B. With four

In 2018, Rock Steady moved into the world of Tribute Shows. Their first show “The Women of Rock” has been performed at Cafe Roux and Jagger Lounge numerous times to sold out houses and with rave reviews. Unfortunately, with the onset of Covid 19 the band, along with every other band has had to remain in lock-down. With the lowering of restrictions, Rock Steady has begun performing again.

Bass player, guitarist, drummer, sound engineer, producer, and band manager.
Colin started playing guitar at 12 years of age and has been part of many bands, some being Tense Emotion in the early 80’s, MKR in 1986, Night Whisper, a duo with Sarie Award winner Stacey Leigh and Tall Order, a successful Cape Town party band who were together from 2006 – 2013. He managed the highly acclaimed African Jazz Band, “The Elite Swingsters and Dolly Rathebe”, who were signed to Gallo Records, negotiating recording contracts and accompanying them to major international jazz festivals. Colin is also the founding member of Rock Steady.

Damian joined the band in 2020 when Sedley Barr, longstanding drummer and founder member resigned. He is an experienced drummer and teacher. He has played in some amazing bands over the years, including Sabretooth, a Melodic Heavy Metal band.

Josh has been playing guitar since the age of 13 and has been the incredible guitarist for Rock Steady for the last seven years. He was also a member of the original rock band, Smoke and Mirrors, and has several original projects he is currently working on. He amazes the audience with his high energy guitar solos and stage performance.

MEL has worked extensively both in South Africa and around the world.
Besides performances at most music venues in South Africa, she has also had multiple 5 Star hotel contracts, as well as a year contact with South Africa’s biggest musical theatre company “The Barnyard Theatre”, where she had a lead role in the hilarious “80’s Rewind” show – a high energy show. It incorporated fun 80’s dance moves, together with iconic songs like ” Take my breath away” and “I just can’t get enough”.

She has also performed at many high-end events with various bands such as “Grand White Party” in Pretoria, Midrand and Johannesburg in 2017. Mel even performed at the famous New Year’s Eve party at Sun City for two consecutive years during 2016 and 2017.
In 2018 she ended off 2018 singing to the exclusive passengers on the luxury liner “The World”

Mel joined Rock Steady in early 2021 when longstanding vocalist for Rock Steady, Sharyn Seidel, was unable to perform with the band due to the pandemic.
She also writes and produces her own original songs. Keep an eye out on social media.

Pam started piano at 5. She played her first concert in the Durban city hall with a Beethoven sonata when she was 7. Pam joined her first rock band, Harris Tweed, in 1971 and won the prize for the best all-round musician at the battle of the bands in 1972, playing keyboards, guitar, flute and doing vocals. Pam spent several years playing for Sox, an accomplished dance band in the 70’s.
Pam has played in many different groups, duos and solo outfits in both SA and France. Her music genres have ranged from folk to flamenco and jazz to traditional rock.

She has recorded her own compositions and released her first album “Pam Levesque…at Last” in 2014.
Music is Pam’s source of energy, inspiration, and enjoyment.
Her pleasure is sharing this with others.

**Arrive from 4pm. show at 5pm. **Covid protocols apply at all times.