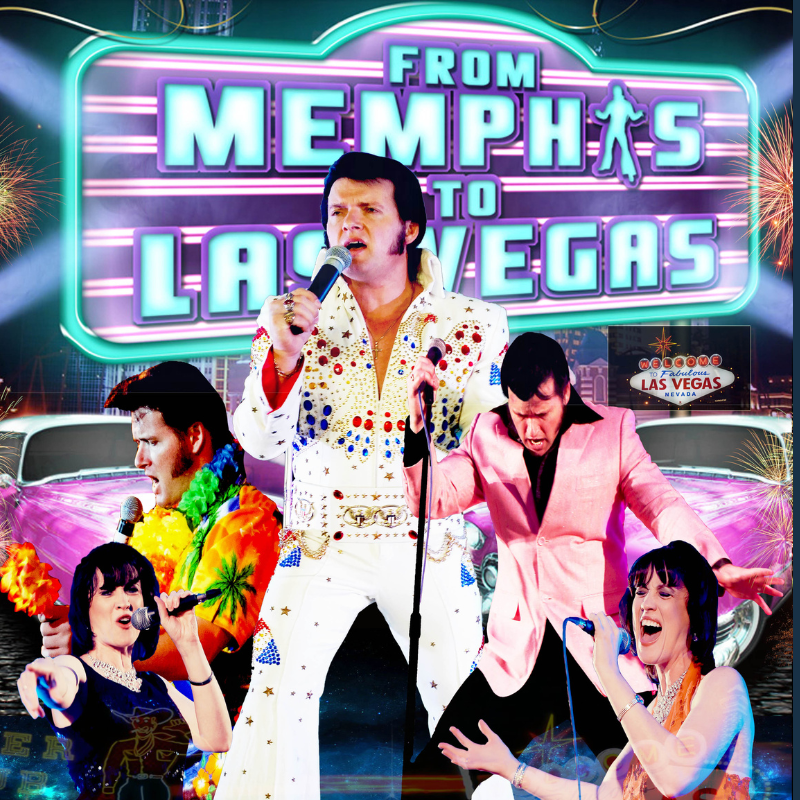 James Marais and Monique Cassells are renowned for their oldies music tribute shows, and are now bringing their “From Memphis To Las Vegas: Elvis Tribute” to Café Roux for the first time. The show covers many of the King of Rock ‘n Roll, Elvis Presley’s greatest hits from all three decades of his career, namely the 1950s, when Elvis became an international rock ‘n roll star, the movie years of the 1960s, and the glitzy 1970s, when Elvis reigned supreme in Las Vegas. The show is a mini-theatrical experience, featuring the dynamic vocal and visual performances of James and Monique, alternating as a duo and individual performers, who also do multiple costume changes throughout.

James is the no. 1 Elvis Presley tribute artist in the country, and has appeared on television several times, including appearances on SABC 2’s game shows, “Noot Vir Noot” and “Musiek Roulette”, as well as Kyknet’s “Jou Show”, presented by Emo Adams. James won the Elvis tribute artist competition held during the Elvis Festival Africa at Storms River Village in Tsitsikamma, Eastern Cape in 2010. Thereafter, he travelled to Wales to represent South Africa in the Elvis World Cup competition, where he finished 4th out of 10 other finalists from all around the world, including the USA, Australia, England, Germany and Scotland.

Monique is a very accomplished vocalist, having performed many different genres of music over the years, including rock ‘n roll, rock, pop, country, blues, ballads and even light classical. She was the only female performer singing Elvis music at the Elvis Festival Africa in Storms River Village in 2010 and 2011, where James also participated. She made her television debut on SABC 2’s “Musiek Roulette” in May 2018.

“From Memphis to Las Vegas” features James Marais paying an authentic tribute to Elvis, with his powerful vocals and dynamic stage moves, while wearing replicas of costumes Elvis wore that will remind audiences of Elvis in his prime. Monique Cassells complements James with her strong, unique performances of Elvis’ music, adding a fresh flavour to an Elvis tribute. James and Monique will also perform some exciting duets in their unique style.

You can expect to hear all the songs you know and love, including “Heartbreak Hotel”, “Don’t Be Cruel”, “Hound Dog”, “Love Me Tender”, “Jailhouse Rock”, “It’s Now Or Never”, “The Wonder Of You”, “Suspicious Minds” and many more!