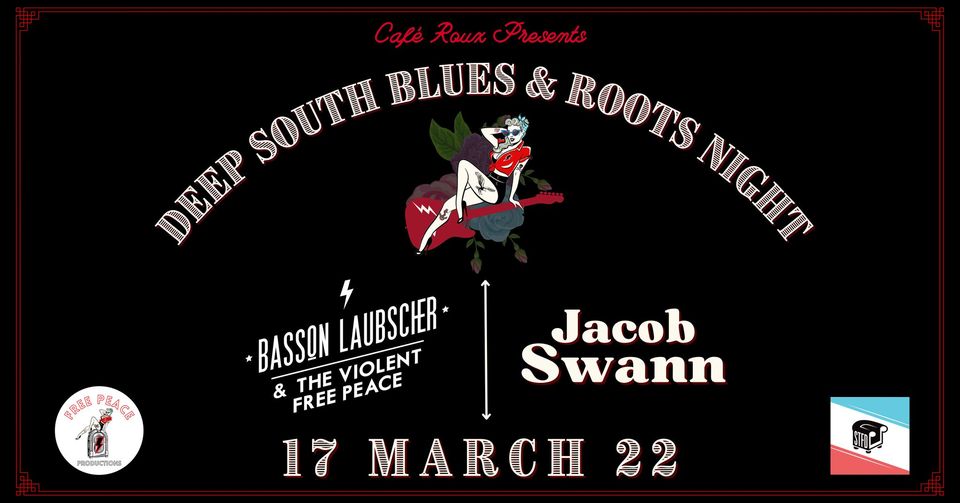 Join us for a beautiful evening of Folk / Country / Blues courtesy of Basson Laubscher and Jacob Swann!
Basson Laubscher:
​Basson is no stranger to the local music scene, having been a part of various bands, from Zinkplaat to the Blues Broers, as well as guesting on numerous other projects!
Witness blues-rock power with a band who delivers their self written and composed music with intense passion and honesty! With practice comes perfection which allows for every show to be a truly unique experience with some face-melting guitars, foot-stomping grooves, and a crowd that goes wild from start to finish. Interactive rock ‘n roll with each band member intuitively reading each other’s body language to create a symbiotic tight-knit experience you are sure to remember!
Jacob Swann:
Jacob, a relative new comer to the scene, is a singer songwriter from Cape Town, South Africa. Deeply influenced by the rich musical history and aesthetic of the Southern United States, artists like John Mayer, CCR, Marcus King and Ray LaMontagne have formed the musical base from which all live performances and songs have grown.
“It was South Africa’s initial lockdown in 2020 that forced Capetonian singer-songwriter Jacob Swann into the studio to record his debut EP, after many years of performing in and around the Mother City. Swann’s subsequent EP is steeped in the Americana riffage of artists like John Mayer and Ray LaMontagne, while it’s bilingual nature (English and Afrikaans) gives it a distinct local twist. From uptempo folk guitar pickings à la Paul Simon (“Al Het Ek Niks”) to a Southern blues-driven tip of the hat to moving on (“New Day”), it’s the quieter, gentler moments on this EP (“Lief”) that set Swann apart from his contemporaries…” – Apple Music (July 2021)
Cafe Roux – Thu 17 March
Arrive from 6pm for dinner, show starts 7:30pm
Tickets are R120pp (excl dinner)