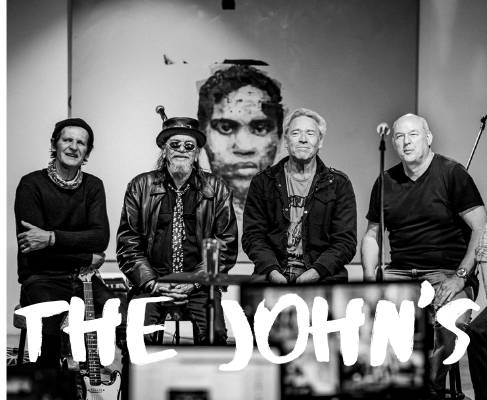 Doc John and Graeme need little introduction to SA music audience, they have played at most major SA music festivals and venues. Doc is known for his gravelly voice perfectly suited for the blues and Graeme for his rock solid drum grooves.

Vince (bass + vocals) played with various bands on the hotel/club circuit for about 30 yrs including the hugely popular Joe Parker (Comedian) Band that toured SA for 2 yrs.  Vince is a seasoned pro that has notched up about 5000 gigs.

John McGuinness (guitar + vocals) relocated to London for 15 yrs and spent most of his music  years in studios, composing, recording and producing. He has written about 500 songs and gigged with various bands in SA and the UK doing mostly original material.   John’s live streamed gigs (from his Blouberg home rooftop during full lockdown) attracted 100,000 viewers.

The 2 John’s met at a gig and got on so well that they decided to start a new band, hence “The John’s”.

A mixture of original bluesy/rock/pop songs as well as some surprisingly melodic covers featuring all 3 voices in sweet harmony. Expect rhythmic rock grooves and soulful feel (rather than blistering solos).