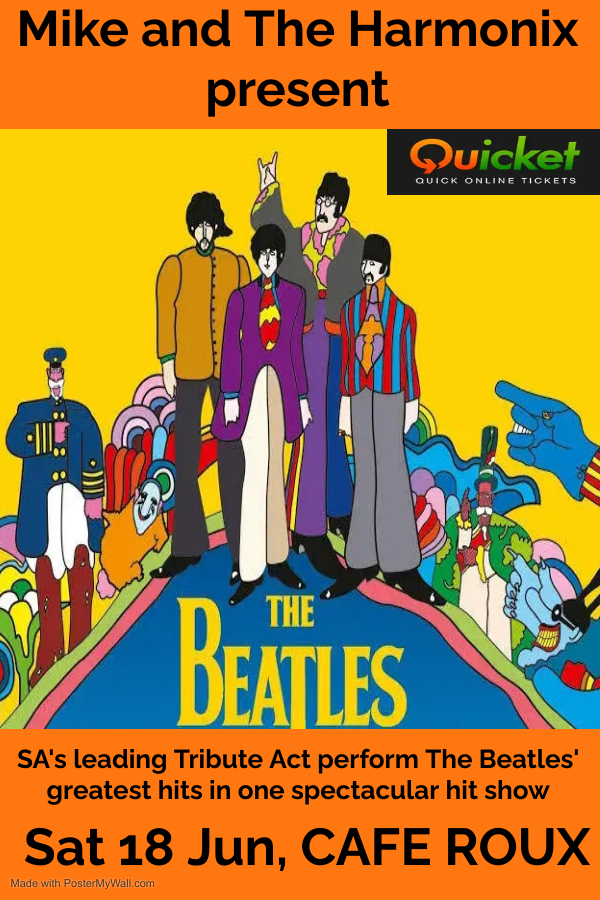 MIKE AND THE HARMONIX TRIBUTE TO THE BEATLES

Mike McCully has again put together another hugely successful tribute show, this time to THE BEATLES.

Patrons will be able to hear timeless classics like SGT PEPPER, DAY TRIPPER, TICKET TO RIDE, SHE LOVES YOU, ALL MY LOVING, and many more.

The awesome HARMONIX group do an amazing job of performing these Beatle hits.

Fronted by Mike himself on drums and vocals, the phenominal talents of Kea Brand and Sjanel Vosloo on female vocals (the same girls who were so amazing the Mike’s TRIBUTE TO ABBA) adds a new dimension to these brilliant songs.

Gordon Mackay on keys,guitar and vocals re-creates the Lennon/McCartney sound whilst Warren Lomberg on guitar always get a standing ovation for his solo in WHILE MY GUITAR GENTLY WEEPS.

Neil Peyton on bass and vocals again shows off his dancing and backing vocal talents, completing the line-up

Audiences are once again asked to participate and sing and even dance along to their favourite Beatle songs .The end of the show always has patrons in full voice with HEY JUDE and YELLOW SUBMARINE !

Show stoppers include Gordon’s COME TOGETHER, Kea’s IMAGINE, Sjanel’s GOLDEN SLUMBERS. Mike’s WITH A LITTLE HELP FROM MY FRIENDS and many more in the show which includes informative Beatle anecdotes as well.

For a night of fun-filled music and laughter MIKE AND THE HARMONIX TRIBUTE TO THE BEATLES should not be missed !!