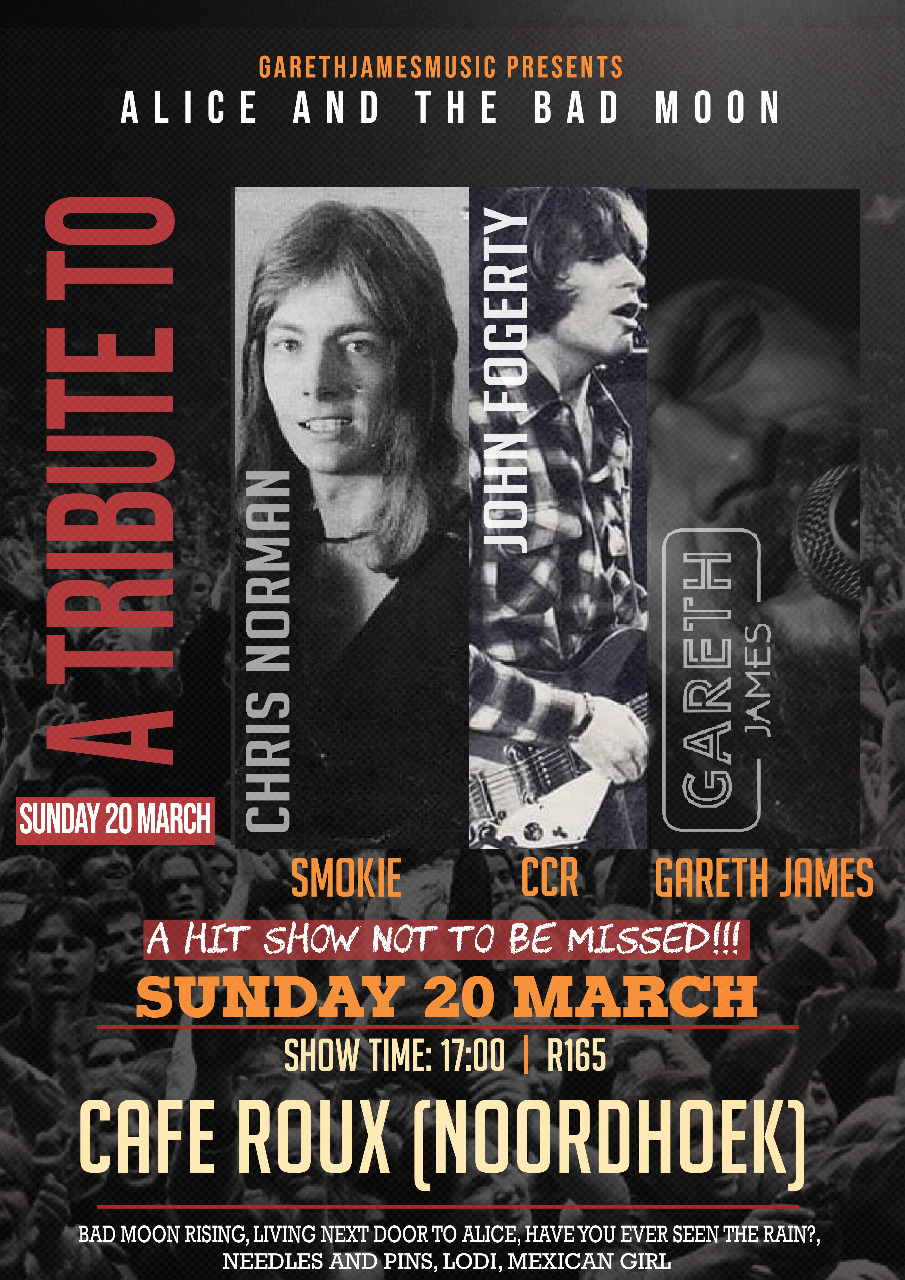 Alice and the Bad Moon

To be rock ‘n’ roll survivors is an achievement. To be Europe’s top live band, forty three years after its inception is truly fantastic; but to still be enthusiastic, fresh, totally committed and in love with the music is a positive miracle.

The first public offering by the newly named band ‘Smokie’ was promptly banned by Radio One as they felt Pass It Around conjured up visions of extremely nasty drugs. It took quite a long period of time for the ‘Smokie’ hit machine to slip into gear. In fact the band were actually recording their second album for Chinn and

Chapman in Paris when the news came through that their single If You Think You Know How To Love Me  had started to sell well in the UK. It eventually peaked at No. 3 and went onto sell millions around the world. ‘Smokie’ consisting of Chris, Terry, Alan and Pete Spencer on drums spent the next 5 years touring the globe

collecting Silver, Gold and Platinum discs almost everywhere they ventured with songs such as Don’t Play Your Rock ‘n’ Roll To Me, Living Next Door To Alice and Oh Carol.

The story of Creedence Clearwater Revival:

After their breakthrough, CCR began touring and started work on their second album, Bayou Country (released January 1969), at RCA Studios in Los Angeles. A No. 7 platinum hit, the record was their first in a string of hit albums and singles that continued uninterrupted for two years. The single “Proud Mary“, backed with “Born on the Bayou“, reached No. 2 on the national Billboard chart. The former would eventually become the group’s most-

covered song, with some 100 versions by other artists to date. During April 1969, “Bad Moon Rising” backed with “Lodi“, was released and peaked at No. 2 in the US. In the United Kingdom, “Bad Moon Rising” spent three weeks at number one on the UK Singles Chart during September and October 1969. Gareth James and his band presents “ALICE and the Bad Moon” – A Tribute to SMOKIE & Creedence Clearwater Revival”.

Coming from a sold out venture of paying tribute to Smokie in 2019 and now back by popular demand, Gareth James (Vocals and Guitar) and his band will be touring throughout South Africa in 2022, to pay tribute to these legendary 70’s RocknRoll bands known as, “Smokie” and “Creedence Clearwater Revival.

The show is called “Alice and the Bad Moon” and will feature the hits known, “Oh Carol”, “Bad Moon Rising”, “Don’t Play Your Rock ‘n Roll To Me”,”Have You Ever Seen The Rain?” and “Living Next Door To Alice” to name but a few.

“Gareth James is a pleasure to work with and we have experienced nothing but soldout performances here in Knysna. What makes his tribute shows so special is that they are more than just music – he understands the soul of each artist, making each gig not only highly entertaining, but memorable too.”

“Gareth and his team is an absolute pleasure to work with! They are punctual and

efficient, humble and polite. The crowd loved them. Gareth has the ability to capture

the attention of the crowd and take them on a journey. It is always a good thing when

“Rock Lily Music Events and Promotions in St Francis Bay have had the pleasure of working with Gareth James and his band on several occasions with the incredible Tribute to Cat Stevens Show and Alice – A Tribute to Smokie.

these legendary artists to life. His musical talent, storytelling and interaction with his audience make this an incredible night of music and entertainment. The attention to detail really makes the show. Once an audience has been to these Tribute Shows with Gareth, they come back for more and every show is sold out.

Super Show by a super talented musician and his band.

A must see Tribute Show”

“Gareth James and his team are a pleasure to work with. Every show we have done with them has sold out and the evening always ends on a standing ovation. Super talented musicians. Hoping they go from strength to strength.”

“This is an absolutely fantastic night of great entertainment. If you love the Music of Smokie, Cat Stevens and Rodriguez’, dont miss this show. Gareth is a great front man who interacts really well with the crowd. You will find yourself singing and dancing along to some of your favourite songs. A great night of music, prepare to be entertained!”