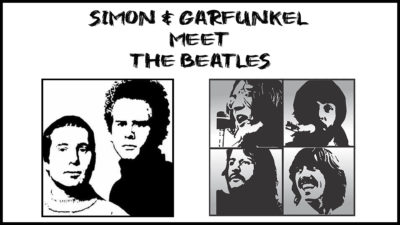 Duck Chowles and Andy Murray of Barnyard fame reunite to bring you an acoustic evening of music and harmony, featuring the greatest hits of two of the best-selling music groups of the 1960s: Simon and Garfunkel and The Beatles, at Café Roux, The Farm Village, 270 Chapman’s Peak Drive, Wednesday 9 December at 8:30 pm. Doors open at 6:30 pm for supper. Tickets: R160 p.p. (show only). Bookings: www.caferoux.co.za / www.webtickets.co.za

The iconic British Beatles, revolutionized music forever, while the popular American folk-rock group, Simon & Garfunkel, were distinguished by their intuitive harmonies and Paul Simon’s songwriting talent.  Duck Chowles and Andy Murray’s voices blend in perfect harmony to some of the greatest songs ever written in popular music. Andy Murray features on lead vocals and lead acoustic guitar and Duck Chowles on lead vocals and acoustic guitar. They will be joined on stage by drummer, Alan Lloyd, and bassist, Karl Hering … both accomplished and experienced musicians, who performed in various Barnyard productions.

Duck Chowles and Andy Murray have been at the forefront of the South African entertainment industry for more than 3 decades.  They started working together in 1993 at The National Arts Festival in Grahamstown, in a Tribute to The Rolling Stones, called “Sticky Fingers”. They continued performing together in countless hit shows such as “Sixty Something”, “Roll over Beethoven”, “Glory Days”, “Station 70” and many more.

Duck and Andy’s perfect harmony blend for The Beatles’ sound is one of their trademarks, and they toured with the hit show, “The Fab 4”- A Tribute to The Beatles throughout South Africa, Zimbabwe and Namibia and enjoyed sold-out performances in 2013 at the Madinat Theatre, situated in the exclusive Jumeirah Hotel in Dubai.

They reunite in a special tribute to the music of Simon and Garfunkel and The Beatles in an intimate acoustic show, celebrating two of the greatest, most influential and successful musical groups of all time.

The Beatles’ catalogue is represented from their early days with hits such as She Loves You, A Hard Day’s Night and Eight Days a Week to the early Paul Simon compositions such as Homeward Bound, The Boxer and Mrs Robinson. Highlights in the show include the beautiful, iconic The Sounds of Silence, Bridge over Troubled Waters, Yesterday and Here Comes the Sun. The first half ends on a rocking note with The Beatles’ hit, Come Together.

The party gets underway in the second half with sing-alongs such as Hey Jude, Cecelia, Yellow Submarine and Ob La Di, Ob La Da, to mention but a few.

“Simon & Garfunkel Meet The Beatles” show was sold out for one night, virtually sold out for the 2nd and 3rd performance and it received rave reviews at The Drama Factory in October and by popular demand, Duck and Andy will be back at this venue on 11 & 12 December.

Join Duck Chowles and Andy Murray at Café Roux, Noordhoek, in a special performance and nostalgic blast from the past, with uplifting, everlasting music that strikes a chord and resonates with old and young alike!