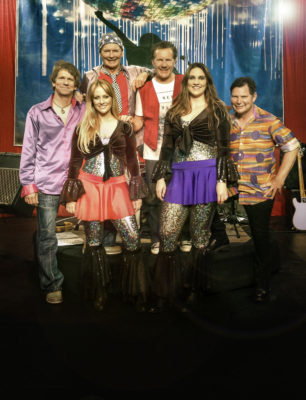 The legendary musical director and producer, Mike McCullagh, of McCully Workshop, “Station 70”, “60 Something”, “Milestones to the Millennium” fame and more, has formed a new young group, The Harmonix, to pay tribute to Britian’s national treasure, The Beatles.
The exceptionally talented cast, headed by Mike himself on drums and vocals, will re-create many of the sounds of the Swinging Sixties, as well as putting their stamp of originality on their versions of Beatles’ songs.

Patrons can expect songs like “Hey Jude”, “Get Back”, “Ticket to Ride”, “Norwegian Wood”, “Sgt. Pepper”, “Back in the USSR”, “Obladi Oblada”, “ I Feel Fine” and many more Beatle favourites.
All in all, the two hour show will have audiences dancing and singing along to their favourite Beatles’ songs, whilst laughing at some hilarious facts and quotes!
For Beatles’ fans and lovers of music in general, this show is not to be missed!

***Please note that dinner is available from 7pm & show starts at 8:30pm