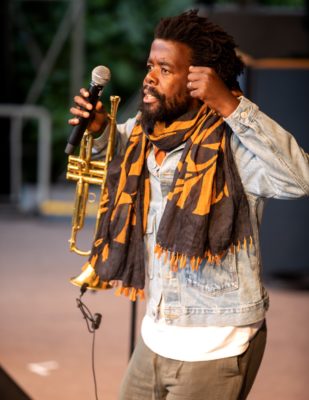 Come experience a night of beautiful Afro-Jazz Soul by one of South Africa’s most exciting artists around. Mandisi Dyantyis released his debut album at the end of October, this body of work has already garnered significant and positive attention on all spheres of media and radio. SOMANDLA is a work premised on the sacred act of prayer, peppered with issues of current societal interest and most noteworthy, the “old school” romantic sentiment delivered in the persuasive elegance of his mother tongue, isiXhosa. This debut offering is a befitting exhibition of Dyantyis’ versatility as a prolific songwriter/composer, trumpeter, and outstanding vocal artist.

Mandisi Dyantyis is a South African trumpeter and vocalist who has recently released his debut album entitled Somandla and was nominated for the SAMA award for best Jazz Album of 2019.

He was recently nominated for a the Mzantsi Jazz Awards and The Afrima [African Music Awards in the “Best Jazz Artist” category.

This incredible album has something for everyone, and I am convinced that you will certainly find a track that resonates with you.

This is the link to his official video for the song “Somandla”.

On the success of this debut album, He has played the Summer Silo Concerts, [3000 people] J&B Met, sold out the Grahamstown Jazz Festival, and sold out very club and mini festival bookings since.