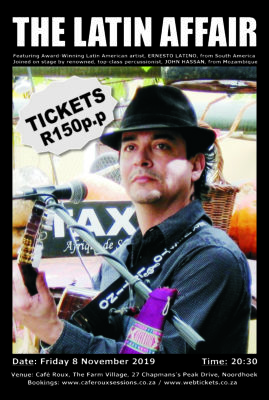 Brace yourself for a Latin Affair that will be unforgettable, and far more exciting than DESPACITO!

Ernesto Latino, originally from Paraquay, South America, a multi-skilled musician and specialist of various Latin genres, will transport you to exotic destinations like Peru, Agentina, Brazil, Spain, Italy, Mexico and Greece, to mention but a few, with his beautiful collection of Mediterranean and Latin-American music at Café Roux, The Farm Village, Noordhoek on Friday 8 November at 20:30. Dinner from 18:30 Tickets: R150 p.p. (show only) Bookings: www.caferouxsessions.co.za / www.webtickets.co.za

Ernesto sings with ease in Spanish, Italian, Portuguese and English and will perform popular cover songs from renowned artists such as Julio Iglesias, Gipsy Kings, Andrea Bocelli, Michael Bublé, Enrique Iglesias, Dean Martin, Helmut Lotti, Patrizio Buanne and Carlos Santana, amongst others. Sit back and be immersed in the mystery and magic of this fascinating musical journey, that will showcase the spectacular guitar skills and honey-toned voice of this virtuoso, as you are treated to some romantic hits like Amor Amor, That’s Amore and Il Mondo, and others, as well as to foot-tapping, pulsating, vibrant hits like Despacito, Volare, Bailando, Bamboleio, Lambada and La Bamba, which will have you dancing in the aisles.

Ernesto Latino was an integral member of some of the most celebrated Latin groups, such as Los Gomes and Los Indios and won numerous awards with them, apart from performing on TV shows across countries such as Venezuela, Columbia, Peru and Argentina.  Prior to moving to South Africa, he lived in Osaka, Japan for 5 years where he performed as a solo artist across Japan and China. Ernesto has won and earned the respect of many Latin aficionado.

He will be joined on stage by renowned, to class percussionist John Hassan from Mozambique. John has performed with Toto, the late Johnny Clegg and Miriam Makeba, and in the 80’s he performed with the band, Stimela, and Ray Phiri. He joined Brenda Fassie in 1990 and performed in and around South Africa, France, London and most countries in Africa. Currently he performs with artists like Judith Sepuma, The Bala Brothers, Jimmy Dludlu and others.

“The Latin Affair” is a show that will resonate with young and old alike and that will truly be memorable!