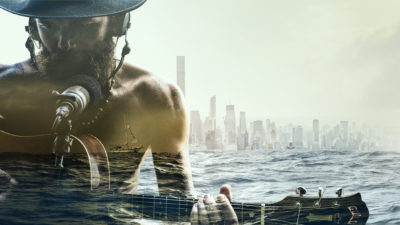 The Jack Mantis Band formed in Cape Town in 2007. Their music speaks of adventure, travel, humanity, struggles and triumph. Having focused most of their attention on the United States and Europe, it is a rare and special moment when they gather to step onto a South African stage (like that time they opened for American singer-songwriter Ben Harper at Grand West Arena earlier this year). Jack has just wrapped up a largely sold out 100+ date tour across Germany for the film release of “Blown Away” (officially selected for the International Ocean Film Festival) and has returned home for a run of shows in the African sun this summer.
“What we discovered was that music is a bond that builds bridges across unknown expanses. JMB has become a living, breathing, evolving, aspect of our musical union. If we can facilitate a small shift from within our fans, and always be a positive influence to our listeners, then we have the greatest job we could ever have wished for ”, says Jack.
When it comes to South Africa, the Jack Mantis Band still has it’s place as one of the country’s top jam bands, sharing the stage with the likes of Prime Circle, Kahn Morbee (The Parlotones), Ard Matthews, Arno Carstens, Albert Frost  and – most recently – Dan Patlansky. Earlier this year, JMB opened for the American singer-songwriter Ben Harper at Grand West Arena in Cape Town.
With a history steeped in music and a lifetime spent gaining insight and wisdom the world over, Mantis brings something truly generous to his performances. A sense of common humanity and togetherness. The brotherhood between band members and the sincere heart expressed through their music is tangible. It is undeniable that their vision is to create a conscious shift through their music and to hold a space for meaningful shared experiences.
For more information, visit www.jackmantisband.com
#jackmantisband #jmb #jackmantis #unwrittenlife
**PLEASE NOTE: DINNER FROM 7PM. SHOW AT 8.30PM
Previous Post
Next Post
Scroll To Top
We use cookies to improve your experience on our website. By browsing this website, you agree to our use of cookies.
Accept