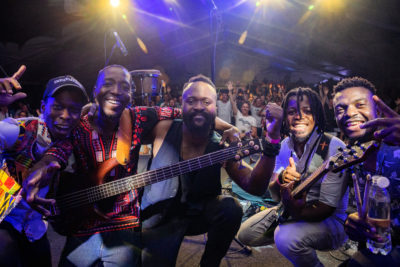 “Flying Bantu” is a musical act from right underneath the magical spray of the Victoria Falls, Zimbabwe. Their versatile sound embodies various flavours and boldly expresses an Afro: Rock/Reggae/Funk/Jazz mix which can best be described as “Afro Fusion”. Between 2016 and early 2018, the five piece act recorded a five track EP (”Cruising Attitude”, 2017) and a ten track album “Ceasefire” Released in March 2019.

In their short career as a touring act, they have managed to perform at various festivals with the biggest to date being South Africa’s Rocking the Daisies where they have appeared in 2016 and 2017 back-to-back. In November 2017, Flying Bantu were selected to open the stage for the Zimbabwean legend Oliver Mtukudzi, who performed for jubilant crowds at the icon’s 65th birthday concert at the Artscape Theatre in Cape Town. This marked a defining moment of international recognition from a regional audience which has spurred the band on to seek greater heights.

In April 2019 the band made their first appearance at Splashy Fen Festival just outside of Durban, which is one of South Africa’s largest and longest running music events. Shortly afterwards, the band stepped off the African continent for the first time when they were invited to showcase in Toronto as part of Canadian Music Week 2019.

“Our hope is that we are a product whose reach transcends the borders set by culture, race, religion and even genre in a grand quest for a togetherness amongst citizens of the world. We are really trying our best to say something relevant in today’s world. We are expressing something born of a 21st century Africa which is culturally vulnerable, yet more assertive than the world might yet realise” – Flying Bantu