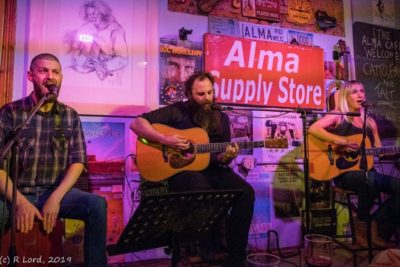 Catto, Eaves and Tait stems from a shared gig sometime back between Hatchetman and Berrisford Rose. What was supposed to just be a few collaborations on the evening turned into something very special, with an overwhelmingly positive response from the fans in attendance, it was immediately decided then and there that these needed to become a more regular occurrence.
Join us at cafe Roux on Thursday the 26th of March for an evening of other worldly harmonies and musicianship of the highest caliber.
Doors 6:30pm, show 8:30pm
Tickets are R120 and available at www.caferoux.co.za
A little more about the artists:
Matt Catto
Born in Joburg into the musical Blundell folk dynasty, my earliest memories are of family singalongs, barn dances and many of the big folk music personalities of the time coming around to the house for visits or rehearsals. After moving to Cape Town in 1999, I pursued my love of music by helping form a band with my brother Nick and some school friends in 2001. Several bands (and as many genres) later, I settled on a group which focused on three-part harmony and emotive, thought-provoking song writing. Nearly six years later I am still very much focused on singing, and deeply enjoy creating harmonies with similarly inclined musicians. Oh, and I now also do a half-decent percussionist impression ;-p
Jonathan Tait
Jono Tait was born in Cape Town and took to playing music as soon as he started school. Starting out in the choir and taking piano lessons, he branched out into trombone in high school. At the age of
15, he decided to pick up guitar and has not looked back since.
Jono first and foremost established himself as an acoustic player and songwriter before picking up an electric and giving that a real chance at the age of 19. His first bands were acoustic and harmony
driven, notably The Hedges and For Folk Sake.
In 2013, Hatchetman came together, an acoustic, folk rock trio built around a unique three part vocal harmony blend. The band won two Silver Ovation Awards from the National Arts Fest (2015 and 2017), appeared on the Cape Town Folk and Acoustic Festival two years running and has played festivals and venues across South Africa.
Jennifer Eaves
Raised listening to Neil Young and Joan Beaz, trained classically at UCT, and with nearly 20 years spent performing around South Africa and Europe, Jennifer Eaves is a musical enigma. Morphing between classical musician, celtic, and Folk story teller, Jennifer has immersed herself in the world of emotive songwriting.
With her 2 previous albums “Braiding the Silence”(2006) and “Land of Lonely”(2011) in her pocket, Jennifer launched her full length studio album “Half of You” in May 2019 which tells stories from the road, the heart, and the home. It will take you on a journey of what it means to be human, to be present in our own lives, and the world around us.
Jennifer has performed at the 2013, 2014, 2016 and 2017 versions of the Cape Town Folk & Acoustic Festival, held at the Baxter and Kirstenbosch respectively as well as other local and national festivals. Selling out listening venues both as a solo artist and as a part of the stunning Jenny and the Jameses trio which incorporates, traditional folk and bluegrass together with Jennifer’s solo material.
**PLEASE NOTE: DINNER FROM 7PM. SHOW AT 8H30PM
Previous Post
Next Post
Scroll To Top
We use cookies to improve your experience on our website. By browsing this website, you agree to our use of cookies.
Accept