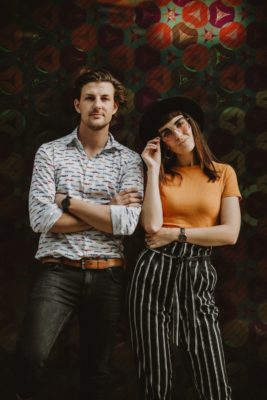 Bottomless Coﬀee Band is a Cape Town based multi-instrumental, alternative duo consisting of married couple Lourens and Esté Rabé.  Their style can be described as folk-pop with a hint of blues and classical.
The group was formed as two students at Stellenbosch University. Music gave birth to a love story that was soon to hit the student town by storm. Lourens; a city boy from the Northern Suburbs of Cape Town, met Esté; a drama student and small-town Karoo girl from Graaﬀ-Reinet at a choir rehearsal.
They soon realised that they had more in common than a mutual dream to be musicians, they both wanted to use music as a platform to reach people with an uplifting message. The duo started performing together in 2010 and weekends gradually ﬁlled up with festivals and theatres. After completion of their studies, they both went into full time  corporate careers; Lourens an Investment Analyst in the Asset Management industry whilst Esté headed up a theatre company.
The duo continued their pursuit of music part time. They never let go of that initial dream but continued the pursuit by constantly writing new songs for their repertoires and adding more instruments to intrigue crowds at their shows. By 2014 they were juggling 10-15 shows per month with full time careers and it soon became apparent they would reach the point to “quit the day-job” and take the leap of faith to make music professionally.
After releasing their self-produced debut album Room With A View at the end of 2014, they embarked on a national tour across South Africa. The recording of Room With A View was initially intended to document what the duo thought was an exciting opportunity to get a taste of a career in music, little did they know that it was only the beginning.
The tour was a sell-out and BCB became crowd favourites for melodic storytelling and electrifying performances, inspiring the nostalgia of the folk-rock legends of yesteryear. With foot stomping rhythms, hard hitting lyrics and hints of the dramatic, they are impressive to watch. They maintain a “feel good” atmosphere throughout their music and performance, as is their outlook on life.
Lourens’ musical background is vested in garage band style Rock ’n Roll and Esté’s training in drama and classical singing made this crossover genre something unique on the South African music scene. After several successful tours in their home country, the band wanted to spread their wings.
During 2016, after a sell-out tour in Namibia, they embarked on their ﬁrst international tour spanning over several countries in Europe (Belgium, Netherlands) and the United Kingdom (England, Scotland), ending the two month tour in Scotland with a two week stint at the Edinburgh Fringe Festival.
They represented South Africa with their self written and produced show “Bottomless Coﬀee Band – Married Multi Instrumentalists”. They were fortunate also to be invited to perform live on BBC radio 2.  Being so nervous of the Scottish accent and important interview, they accidentally invited the entire audience for a “Braai” and a glass of wine whenever they visit South Africa.
All this lead to a meet and greet invitation with Emmanuel Nkosinathi “Nathi” Mthethwa; South African Minister of Arts and Culture on his visit to the festival. All the South African artists were thanked for their contribution to South Africas international cultural footprint and ideas were workshopped for how to make these exchanges more accessible for more artists.
The Bottomless Coﬀee Band soon started averaging 150 shows per year. The group started working on new material, a lot of it written during multiple touring, inspired by ordinary South African stories. During 2017 their paths crossed with accomplished producer, Theo Crous, whom they would work on to complete their second and ﬁrst “commercial release” album, Anthelia.
Anthelia was written over a period of 12 months, and the studio process took another 6 months. All instrumentation was played by the group except for session musicians performing the horns section.
Anthelia enthrals listeners and take them on yet a new musical journey. The sound is a combination of folk and rock with hints of classical tones. The songs on this album tell the stories of living life to the full; love, disappointments, inequality, passion, tears, joy, time and memories. Anthelia was release in South Africa in February 2018 and toured in Namibia in May 2018 with a 8 show sell-out tour across the country. It was also launched and released with a 4 show tour in the United Kingdom during September 2018.
Their latest release is a compilation album of a series called “Sitkamer Session” on YouTube. “We started this concept two years ago. The idea was born out of a need to honour the musicians and songs that have inspired us on our music journey.”, says Lourens.  Esté adds, “The common word for this concept is “covers”, but for us it was much more than doing covers, it was a process of really digging deeper into the legendary work of the artist at hand and to go about with the song as if it’s a precious piece of porcelain. It ended up with us ﬁlming videos of the songs in our Sitkamer (the Afrikaans word for living room).” Besides being a full-time touring band, Lourens and Esté also believe in using their music and skills to uplift their communities and country.  This has lead to their involvement as ambassadors and patrons for various organisation including MAD (Make a diﬀerence leadership foundation, Francois Pienaar) and CCFA (Community Conservation Fund Africa, Mantin Collection)
Lourens and Esté wish to inspire through their music and performances as they believe that music is a tool to unite and uplift. Although they have worked hard the past 9 years to achieve a modest form of success, they know that they have only started scratching the surface of taking South African music to more people and further into the world.