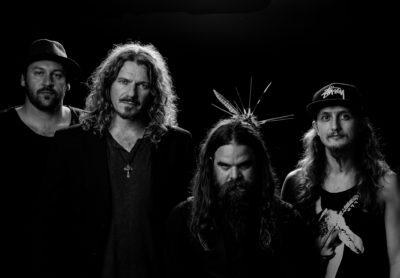 The Black Cat Bones is a South African blues/rock band formed in Pretoria in 2007. The group consists of members Kobus de Kock jr (vocals) and Andre Kriel (guitars) with Chris vd Walt (bass), Gareth Bunge (Drums) and is considered to be one of the current top performing acts in South Africa.

Both their debut album ‘Silverton Swamp Songs’ (2009), and the critically acclaimed second helping ‘The Long Drive’ (2011) were heavily influenced by Kobus and Andre’s blues roots but, in 2013, the band released their third (SAMA nominated) studio album ‘Beatipliller’ which showcased their collective influences as a diverse 4-piece rock act. In the same year the band also won the MK Award for ‘Best Live Act’ and emerged from being underground sub-culture champions to a group that is adored nationwide by a constantly expanding, and ever-loyal following from all walks of life.