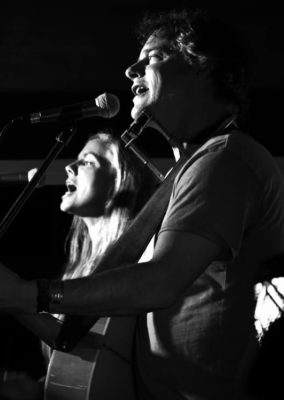 Singers of some of the most played songs in South African radio history, Wendy Oldfield and Robin Auld combine a mix of djembe, soul vocals, harmonica, stompboard and African blues guitar stylings to create a fresh roots sound.

The No 1 “All of Woman”, “Baby you been good” and many other top 20 songs are among the Robin Auld catalogue, with Wendy Oldfield’s “Acid Rain” and “Miracle” also being instantly familiar to SA audiences.

Both veterans of the South African touring circuit, their collaboration is uplifting and upbeat with roots versions of their old hits along with their contemporary catalogue.

Auld learned to play the guitar by listening to Hendrix, Ry Cooder and Neil Young, also absorbing influences from the various guitarists of Southern Africa.

Based in Cape Town, he has performed and recorded in New York, London, California, Glasgow and Nashville, and over 16 African countries.

Award winning Wendy Oldfield started out as lead vocalist in the iconic rock band Sweatband with the legendary guitarist John Mair. They achieved national prominence with the massive hit “This Boy”, and since then she has performed with Brenda Fassie, Steve Newman, Lionel Bastos, Jabu Kanyile and Hugh Masekela, and as singer of SA world music supergroup Mondetta established herself as one of SA’s top vocalists.

Auldfield has had a great reception from SA audiences, recording an album and touring nationally in the last year with sold out shows and headline appearances at Grahamstown festival.

A concert of stellar entertainment from two of SA’s top performers…not to be missed!