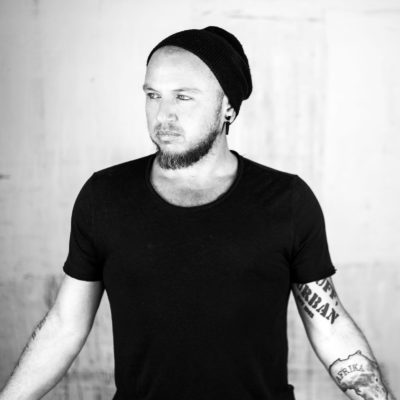 Being ARD matthews
Singer, songwriter, and front man of South African multi-platinum selling band Just Jinjer, ARD matthews has been a household name and personality in his native country of South Africa, and across the world, since 1996 when the band gained prestige through having the biggest selling debut rock album in South Africa, and a reputation for world class live performances.
Fast forwarding through two decades of local & international touring, headlining festivals, album recordings and releases, ARD released his second solo album in 2019 called ‘Impossible Machines’, and promptly scooped up a South African Music Award (SAMA) for best Alternative Album, cementing his place in the SA music landscape in his solo capacity.
Since the beginning of South Africa’s Coronavirus lockdown, ARD has been committed to raising funds for those most in need with his live stream rooftop series called the ‘Play it Forward’ where, to date he has assisted in raising hundreds of thousands of Rands for people and animals who are not in a position to help themselves through the crisis.

In January of 2020, ARD bought a 66ft wooden pirate sailing vessel, built by the SA Navy, called the Howard Davis and promptly dubbed her ‘The Impossible Machine’ to be an eponymous, tongue-in-cheek extension of his most recent solo work. His intention is to sail her around the world, all the way collaborating and spreading a message of peace and good will. She will also carry a strong environmental awareness with her wherever she may go.

His latest release, ‘Free To Begin’ is a song who’s lyrics were entirely written by his online FB friends and fans in what was a truly unique collaborative effort that talks about this interesting