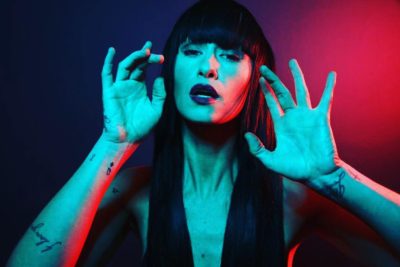 Anna Wolf is an artist not easily forgotten.

A performer, with a performance, that will stay with you long after she steps off the stage.

Anna Wolf creates alternative pop for the music snob, forcefully performed to stamp her into audiences’ memory.  She is a seductive, dark and vulnerable artist that will hypnotise you on a journey of self-discovery, leaving you with a feeling of being heard.  Although she has had many names, released numerous albums and performed in front of thousands of fans across the world, she has only recently skinned her past by facing it with her debut single, “Believer”, as Anna Wolf.

Born in Pretoria, South Africa, in turbulent home circumstances, she signed her first record deal at a very young age.  Releasing her 2013 debut album, The Dark Horse, under the moniker, Tailor, the album was nominated twice at the SAMA’s (South African Music Awards).  She received another SAMA nomination in 2015 for her second album, Light, as well as one in 2016 for her third album, Trust Pt. 1.

In 2016, Wolf, still Tailor at the time, recorded her third album, Trust Pt. 1, with producer Zak Loy (member of the multi-platinum American band LIVE) in Austin, Texas at the infamous Orb Recording Studio.  She collaborated on this album with various musicians ranging from bassist, Ainar Peterson (Kelly Clarkson) to drummer, Antoun Ramy (Seal, Black Eyed Peas) amongst others.  She was asked to collaborate live and in studio with various world renown performers, producers and industry leaders such as LIVE frontman, Ed Kowalczyk, Ken Stringfellow (The Posies, R.E.M., Big Star) and American/Grammy nominated music producer Tim Palmer (David Bowie, Pearl Jam, U2) to name a few.

In 2017, she was asked to open for Johnny Clegg on his final tour, playing to sold-out audiences in South Africa and London’s iconic Apollo Theatre in Hammersmith. In 2018, she went out on her own, playing a sold-out South Africa tour with demand increasing in the UK and Europe, she was then commissioned to perform in the Netherlands.

Around this time in 2018, she decided to follow her heart to London, officially becoming Anna Wolf, where her talent as a songwriter and performer was recognised by renowned producer and remixer, Pete Boxsta Martin (Sugababes, Jessie J, DJ Marshmello).  Boxsta Martin offered her a production deal under his company Three Bears Entertainment the day after she sent him a cellphone video of a song she wrote and performed in an acoustically unique bathtub.

“Believer” was born in the studio that same week with some of the noises Wolf made in the bathtub making it into Boxsta Martin’s explosive final mix.  Boxsta Martin was ignited to create an EP with Wolf that started with the release of “Believer” in 2018.  Second single, “Silence”, was released in 2019 with much hype and worldwide coverage.

Wolf’s demand hasn’t let up… she’s recently collaborated with Stereophonics’ drummer, Jamie Morrison.  Her tracks “Shaped Like A Gun” and “Wolf” from her debut album, Dark Horse, featured on FOX Network’s hit show, ‘So You Think You Can Dance’ for two seasons.  She was asked to join the American rock indie darlings, The Posies, on their 30th Anniversary tour across the UK in 2018 and has performed solo shows at various iconic London venues, showcasing at SXSW and playing South Africa’s OppiKoppi and The Real Concert Series in the UK and South Africa and more!

In 2019, Unsigned Only (www.unsignedonly.com) announced Anna Wolf as the Grand Prize Winner for her track, “Believer” in Nashville Tennessee.  For the first time in Unsigned Only’s history, the grand prize was awarded to a South African artist.  The judging panel is an illustrious collection of global, award-winning, multi-platinum selling musicians and industry executives, this year including the likes of Robert Smith (The Cure) and Aimee Mann.  They collectively described Anna Wolf as “truly a compelling and rare artist…a performer with passion and style, a singer with haunting beautiful vocals, and a songwriter with depth and vulnerability… one of the most magnetic and inspiring artists we have ever come across”.

Wolf ended a superb 2019 with another sold out tour of her native South Africa. 2021 doesn’t see Wolf showing signs of slowing down; with more releases of which were recorded in South Africa before COVID19.

“Anna Wolf is an extremely rare artist simple on the basis of her fearless experimentation.  She has all the conventional quirks expected of an Indie Electro singer.” NEON MUSIC

“Anna Wolf can certainly lead a pack, making everyone in the building turn heads and say ‘who is that woman?’
I didn’t just watch a performance, I watched an art piece.” NEON MUSIC

“Anna is just so brilliantly out there.” PHACEMAG

“… a haunting pop ballad which tackles the subject of witnessing domestic violence as a child.” LOUD WOMEN (Video of the Day “Silence”)