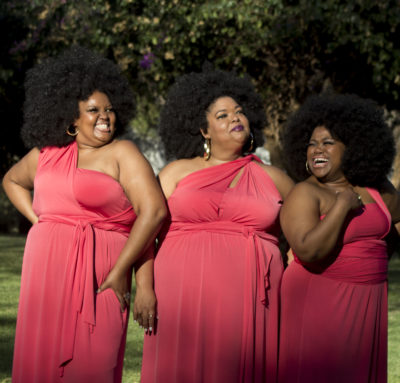 3 Tons of Fun have emerged over the last 8 years as one of Cape Town’s most loved all-female groups. They are in great demand on the corporate circuit throughout South Africa and have performed at functions for top companies including amongst others Standard Bank, Ernst & Young, BOE, Sanlam, Transnet, Bidvest, Pick n Pay, Rabie Properties, IBM and Ericsson as well as at many prestigious events at the Arabella Sheraton Hotel, Kelvin Grove, and at Evita Bezuidenhout’s 80th birthday party in 2005.

MICHELLE THOMAS (alto) hails from Cape Town and has been involved in numerous musical productions including ‘Music Active’ at the Baxter Theatre.

STHE MFUPHI (alto and mezzo) has a diploma in light jazz, plays keyboards and drums, does musical arrangements and compositions, and is well known on the Cape Town jazz circuit, having performed at numerous jazz venues including ‘Mannenberg Jazz Café’.